I got out our Halloween decorations this week. I think it’s probably my second favorite holiday to prepare for besides Christmas. (Not that I don’t complain about the overwhelming task of decorating for Christmas, but you know what I mean.) My daughter Emily hails Halloween as her favorite holiday and she has rubbed off on me over the years.

It ends up being a time for reminiscing. When Frankie was just a couple of months old, he donned his first Halloween outfit that read “Treat or Trick” on his baby butt.

The first award Frankie ever got was a trophy for the cutest costume in the town parade. He was only a year old and he was a bumblebee. He was the cutest kid in the world, so that title was well-earned. Out comes the trophy at Halloween time. I had to include his other costume for that year in the pictures- the pumpkin. That would have won an award also if he were allowed to enter twice :). 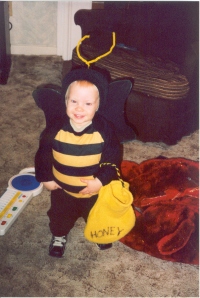 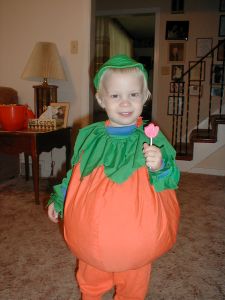 He was Darth Vador three years in a row and it rocked. The helmet was a voice changer and he sounded like Darth when he said “Trick or Treat” and then he would activate the heavy Darth breathing. Superman a year or two. A werewolf once. Then there was the year he was Cinderella. He was gorgeous! His classmates went crazy. He was fine with it until we went trick or treating that night and everyone though he really was a woman (because he was so pretty). We cut the night short and he came home and took off his costume… lol.

Last year he was Dr. Evil from the Austin Powers’ movies. He can do a great imitation of him as well. He looked and sounded great, but was disappointed at the Halloween dance when only two of his classmates had ever even seen an Austin Powers movie. Ah, that’s what happens when you spend most of your time with a brother two and a half times your age. Anyhow, I tried to download the video for you on this, but it’s the wrong format :(.

Makes me smile to remember, then I do what parents usually do. I have a moment of sad, realizing how quickly he is growing up. I wonder what he will choose this year? I dread the day when he tells me Halloween is babyish and there won’t be a costume. Will this be the year? Yep, this is the year. He is saying he doesn’t want to do anything at all for Halloween. I’m hoping he is like his brother, Matthew. Matthew gave it up too until he was a little older. Then one year it hit him that it was very little work for an awful lot of candy.

I guess it’s a time when you get to be someone you’re not. Usually, it’s someone you wish you could be. I wonder who I would be if I were clever enough. No one comes to mind. When you are depressed, you just spend time wishing you weren’t you. It’s not so much you wish you were someone else in particular. You just don’t want to be in your own skin. Anywhere but there would be fine. And have you ever wished that other people in your life were something they were not? I’ve done that, too. I guess that’s called having expectations. Not usually a good thing. Or maybe you don’t really expect anything different from them, but sometimes you hope anyways. Sometimes, you are just that desperately in need.

Anyhow, Happy Halloween a week early. I hope you enjoy the pictures!

My name is Darcy Thiel. What people say they appreciate most about me is my genuine nature. I utilize my professional and personal experiences to increase my understanding and compassion to help others. My career has many faces, so let me tell you about a few. I am a Licensed Mental Health Counselor in NY State and am a couple and family therapist. As an Adult Planning Specialist and End of Life Doula, I take my experiences with my parents’ and husband's illnesses and passing to help others navigate the crazy, complicated medical world we live in. This dovetails with the books I have written. Bitter and Sweet: A Family’s Journey with Cancer, the prequel to Life After Death, on This Side of Heaven is an honest and raw perspective on coping with the diagnosis and subsequent loss of Tim, my spouse. I have done extensive speaking on the above topics through live audiences, radio shows, and an occasional TV spot. For more information, see my websites at www.marriageandfamilycounseling.net, www.babycooppublishing.com, or www.darcythiel.com. Copyright Help for Healing by Darcy Thiel © 2012-2019. All rights reserved.

One thought on “Halloween”

Learning to be Fluent in Happiness & Success

The daily musings of a writer.