When I lecture on death/dying, I often talk about how even with all our modern marvels of medicine, human life always comes back to two basic needs- eating and sleeping. When a person is undergoing treatment, neither eating or sleeping is easy to come by. Palliative/comfort care often restores exactly that- the ability to eat and sleep more easily. That is why research shows that people often live longer with palliative care than they do with curative care (chemo, radiation, etc.).

I’ve been thinking about how recently my eating and sleeping have been not been doing so well. Honestly, not eating well has been a lifelong problem. It has been the exception when I have been able to get a handle on eating properly. I’ve actually been successful, but only for brief periods of time. Every day I wake up and attempt to do so again, but usually by 2:00 pm I’ve sunk again. I have all the education I need, I just don’t have the motivation or willpower to follow through. Or something.

I tried to think of a baby step I could take and I came up with setting up a task in my calendar that comes with an alarm. At 8 am every day, I want to have a protein shake. That will start my day correctly and maybe if it is an actual task that needs to be checked off, I can put my OCD to good use. If I can get that to be habitual, my next goal will be to set a reminder up at 9 pm that says, “No more eating” and eventually decrease the time until 7 pm.

Sleeping is another lifelong battle. Even my baby books talk about the problems I had. I’m sure I had night terrors, they just hadn’t been named yet. I’ve done sleep tests at different ages. I’ve tried all the different medicines there are. But lately, I’ve just gotten in a bad habit of watching Netflix until 1 in the morning. Then I don’t want to (or can’t sometimes) get up when I used to. After waking Frankie for school, I go back to sleep. By mid-afternoon I need a nap in order to get through my activities. Vicious cycle. Once I nap, then I’m up at night again.

My baby step was again to add a daily task set up with an alarm. My goal for the first few days is to go to bed at 11 pm, WITHOUT Netflix or anything else. Even if I just lay there, it will help break the habit. Then I can lower the time by 30 minutes until I get to bed at a more decent time for me.

So simple, but sometimes I just have to hit myself over the head. Your eating and sleeping is off, Darcy so it is effecting everything else. You need to fix it.

Tiny, elementary steps that I feel like I shouldn’t need to still be making at 50 years old, but yet here I am. Small, incremental steps are the only way that I know of though, to make changes that won’t make me want to jump off a cliff.

I love the ‘ol AA slogan: One day at a time. It’s better than not trying at all, right?

Last weekend, I was lucky enough to have not one, but two birthday parties. I mean hey, 50 is a big deal, right? The first night was at my favorite Mexican restaurant and we had about 25 people come for dinner. After we went to a bar that had a dance band. My friend laughed and said I was one of the youngest people there but we had a great time. That night, someone came up behind me to wish me a birthday and I had to stop and think. She reminded me she and her partner used to be clients of mine. I was so very happy to see them. I was honored they would take the time to come up to me, and I was truly thrilled to see they were still together. Later, I watched them dance together and they were just delightful to watch. Made my heart warm. 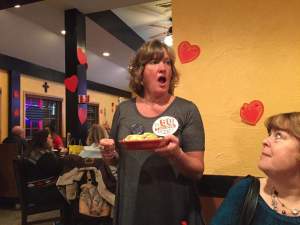 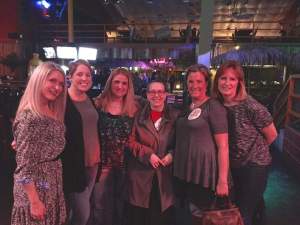 Toward the end of the evening, one of my students from the master’s program showed up. I know she drove a long way. She couldn’t even stay, but she wanted to say hello and give me a hug in person. I couldn’t believe it.

The second night, I had an informal gathering back in Niagara county where I grew up. Almost 25 people came that night too. This group was my family, friends, and mostly high school friends. It was a mini-reunion of sorts. I figured most of them will be turning 50 this year too, although some of them had already beat me. Most of the night was filled with people I don’t get to see very often. One of my closest friends from high school (although she went to a different high school) totally surprised me by coming. I haven’t seen her since… well, I don’t exactly know when. It’s been a very long time. She looked EXACTLY the same, hadn’t aged a bit.

A couple of the girls I was a cheerleader with. That brought some laughs and eye rolls. One girl was a year older than me and I was pleasantly surprised to see her as well. But the real shock came when she told me she reads my blogs and loves them. She said I write with honesty (or something like that). I had no idea she even read them or knew I had a blog. I was so humbled by that. And today when I was weary and didn’t feel like writing, I remembered her comment and it brought a huge smile to my face and enthusiasm to write.

Another girl I didn’t recognize at first. She reminded me she had moved in our later years of school. I had plenty to drink throughout the night, but I was aware enough to remember several comments she made throughout the night. She was truly grateful to have connected with me on Facebook and then be invited to our get together. She had such kind things to say about me and how I behaved in high school. There are actually some traits I seem to have carried on into adulthood and they are actually GOOD ones. So many things we hope we grow out of. She also made my heart warm to think that I could make others feel good without even knowing I was doing it.

One of my friends organized most of this. Created the event, bought cupcakes, you know the drill. She has been having a really tough time lately, but in spite of that, she made sure I had a great birthday. I hope to return the favor soon when her birthday arrives. I love you girlfriend!

I could go on and on. My deepest thanks to all of you who sent cards, gifts (even though I said no gifts!), drove out in the snow, or drove a long way to be part of my milestone birthday. Whether I see you often or once every few decades or so, I appreciate you. I love people, I invest in people, people are my priority. Whether I mentioned you specifically in this blog or not, I was humbled by all the outpouring of love and friendship. Don’t ever think when I fall into the abyss here and there when my depression gets the better of me, that I have forgotten the treasure of friends. I don’t. I swear, I don’t, not even when I’m down and out.

Hugs and kisses to all!

The daily musings of a writer.