I have been told throughout my life that I have very pretty feet. It’s a consolation for having a stomach that makes everyone and their sister ask me if I’m pregnant. At least my feet are nice. I have to say though, they definitely have taken a beating. 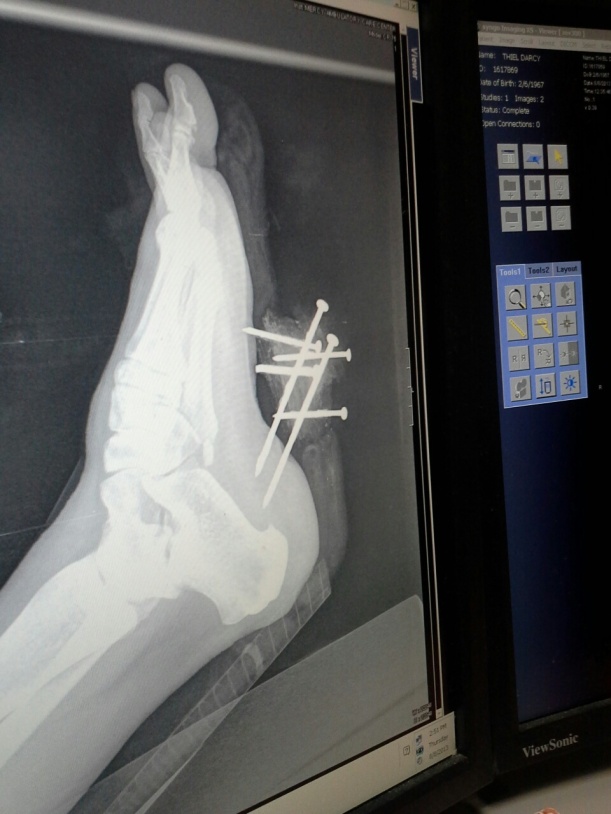 That picture was worth re-posting. That was David’s 10th birthday when I stepped on a nail when doing yard work. (No, I obviously didn’t have shoes on. Did you have to ask?)

Two weeks ago I had a second foot surgery. My doctor asked me if my surgeon knew how I was. You know, never stopping or sitting down. I told her of course he did because he did my other surgery. Besides, I’ve slowed down a lot over the years.

Today I went in to get my stitches out. I knew it was going to be ugly because I know what a baby I am. What I didn’t expect was how awful it looked. I had Tim take a picture because I knew you would want to see it too.

First of all, it makes my foot look ginormous. They are actually not very big. The marker is from the doc when he did the surgery. All the purple though, is bruising. No, it usually isn’t that bad for most patients.

I don’t mean to be a bad patient. I really don’t. I’m not trying to be a hero. I don’t want any more damage to be done. I was pretty proud of myself for being as still as I have been the last two weeks. But the more we talked, the doc just kept shaking his head at me. He wondered why I didn’t actually follow the written instructions he gave me.

The second week, I just assumed things were “as needed” (even though it wasn’t written that way) so no, I hadn’t been taking the anti-inflammatory medicine three times a day. No, I haven’t been icing twice a day. I wonder why the foot is swollen and inflamed?

Yes, I did go to Dave’s cross-country meet by myself, on crutches, in the rain where it was so muddy and slippery people were falling. But I couldn’t miss it, right? And yes, Tim and I painted the bathroom last night and Tim doesn’t do trim so yes I had to be on the ladder.  Oops. Ok, I guess I didn’t do as well as I thought.

By the way, I was only using one crutch for the last week because it was easier. Turns out I was using it under the wrong arm. Duh. I honestly had no idea. That one wasn’t my fault. And it’s just unfortunate that I was using it under the shoulder where I am already in Physical Therapy three times a week for it. But hey, I stopped going to therapy so I could take it easier these last couple of weeks.

I admit it. I’m not the model patient. But if they only knew how good I thought I was being because of all the things I DIDN’T do!!