We got a new carpet this week. A crew of three came to rip up the old and put in the new. One was a female. The guys told me they love working with her because she works harder than 95% of the men on their crew. (No offense men, but that really isn’t surprising!)

She complimented the house and we ended up chatting. Found out she was struggling a bit. She lives in an apartment and is raising her granddaughter. Unfortunately, that usually means her child is either a drug addict or has a serious mental illness. I didn’t pry.

Turns out she could use some of the excess small tables I had that I was going to post and attempt to sell. I told her I would be happy to give her them which saves me the hassle of selling. She was very grateful but didn’t drive. Her boss picks her up every morning and takes her home and she didn’t want to put him out any further.

I went out to talk to “the boss.” I told him I was going to “bat my eyes” at him and he asked what it was I wanted. He had no problem taking the items for her. She was so thrilled. I mentioned that one of them had belonged to my dad. She saw a picture of him on the wall and said he looked kind. She also said she would say some prayers in his honor. It was a lovely and seemingly sincere moment.

She was hesitant to take it at first because of it belonging to him. I told her that keeping it would not bring him back, but it would make me happy to know that someone so kind and appreciative was using it.

It was a lovely day in spite of all the stress that house remodeling brings. For those of you that haven’t been here in a while, you should stop in and see the new bathroom and bedroom. Tim and I have made a great team and things are looking spiffy!

Happy Thanksgiving to everyone, especially those experiencing the loss of someone they care about. Holidays always seem to multiply the grief.

And please share my post if you are able. Always trying to boost interest in these topics and hopefully expose my business. Love to all of you!

I end up doing a lot of financial counseling as a therapist. Money is a pretty big topic for people, loaded with issues of power, control, and desires. The amount of debt the average American carries around is pretty staggering. When I suggest to people that they save and wait until they can pay for ______ (fill in the blank) with cash, the look on their faces is priceless. But then I would have to wait! And that is usually unacceptable.

Anyhow, this blog isn’t actually about money. It is about how Tim and I tried to manage our own selves and our finances. We started out with more debt that income. We set up a strict budget and also developed a wish list. We were always wanting to remodel something or other. I truly don’t think there is one part of our house or the property it sits on that hasn’t had some kind of makeover.

We kept our check register in Excel so I didn’t make any math mistakes. Underneath our balance, there was always a long list. We would discuss what we wanted to see happen and then prioritize what was most important to us. The most expensive items generally stayed on the bottom of the list.

In my conscious mind, I never really had some kind of mission to make all our dreams happen. As I reflect back though, it makes me feel tremendous inside that we accomplished so much. When Tim got sick, we discussed his bucket list. He didn’t have anything wild. I was pushing for an African Safari but he had much simpler goals. The summer he was diagnosed, we had already made arrangements to start remodeling the pool. It was a three-year plan we sorted out with the pool company so we could afford to pay for it. Tim wanted to finish it in one swoop. He wasn’t really thinking he only had one summer left, but just in case, he wanted to spend it looking at the finished project we had been waiting a decade to start. With the help of a whole ton of people, this was what happened.

Not bad, eh? We had a new concrete patio put in, resurfaced the pool surface, and did some other repairs. Some of the balance was paid by the proceeds of the benefit that was thrown in Tim’s honor. He was so proud of the home he made and wanted to leave us with something to enjoy. We certainly have and everyone knows they are welcome to swim here anytime. (And they do!)

A year after Tim died, I was suddenly hit with the idea of finishing the basement. Tim’s dream was to make it a sports’ bar after he retired. He could work on it slowly and use all the memorabilia he had built up over his lifetime. That became my mission on the year anniversary of him leaving us. It wasn’t very expensive to do, but I tried hard to imagine what he would have wanted it to look like and I think we did a pretty good job with it. It is now dubbed “Frankie’s Man Cave.”

Two years ago I got the house resided. Now that was ridiculously expensive. We found a super good crew and it looks beautiful. The trim got changed to gray and I made sure every spot had the vinyl product so I don’t have to keep hiring people to paint every few years. It is now maintenance free and Tim would have loved it. The irony is, I would have never been able to pay for it without his life insurance money. It is sad, but I try to look at it like he participated in it a different way than if he were still physically with us.

This year, I had a contractor redo the gazebo. The goal was to be maintenance free. Painting it was a horrible job and I am always trying to find ways to be more independent. Like any other job, once they started taking things apart, the job was bigger than anticipated. There was no shortage of rotted wood. 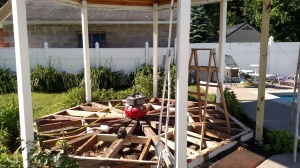 Imagine my surprise when I saw that at the end of the first day. Yikes! But alas, here is the finished project:

And the best part is the maintenance free, beautiful floor. It warrants its own picture:

Isn’t it gorgeous? Who would have thought you could love a floor that much.

It hit me the other day. The gazebo was it. It was the very last thing on our wish list. So Tim, it has taken me almost six years without you here, but we have managed it. Our house is what we worked hard for and dreamed big on. I know there will be maintenance and repairs forever, but this was the last of our visions together now realized.

So come on over and take a dip in the pool and enjoy our hospitality. The goal was always to have a place where people would feel comfortable coming. We never wanted to be private or alone. It’s been hot so far so don’t suffer. Come jump in and celebrate with us. xoxo!