I was asked by a couple of different sources to write about the latest shooting in Florida. I dreaded the thought. Unfortunately, this isn’t the first, or second, or third time this has happened. What is there to say other than it is horrific? And most conversations end up in one of two places- guns and/or mental illness. I have little desire to discuss either issue, so it caused me to ask myself why.

After a few conversations with people, I realized I could come at this topic in a dozen different ways. Maybe it wouldn’t be so difficult to write about after all, but which one to focus on?  Then I had a talk with my friend Darren and I came up with an overarching theme. He gave me permission to steal his verbiage.

Probably the simplest explanation as to why I find it so difficult to talk about these kinds of incidents, is what seems to be like a resurgence of polarization in our country. Perhaps it has always been like this and I just wasn’t aware. From my limited perspective, it feels like the latest election has caused the problem to skyrocket. Now it has become Trump lovers or Trump haters. Guns or no guns, etc..

I find it almost impossible to talk with people at either extreme. How can anyone be so incredibly positive they are “right” when the issues are so profoundly complex? The language people use to describe their positions makes me cringe. It’s so obvious to each side that their view is without question the most sensible answer. Anyone who disagrees must have a seriously maladjusted brain. Yuck.

It also feels to me like the goal is to find blame. I understand that it is human nature to want to be angry at someone. That is probably why so many people end up angry with God. God is always a good scapegoat if you can’t explain the situation away with something else. Let’s blame the president this time, even though these shootings have been happening for quite a while now under the leadership of Democrats and Republicans. Let’s blame the FBI for making an unforgiveable mistake. Granted, some mistakes are catastrophic, but I wonder just how many “warning signs” get turned into the FBI every day. Is it even possible to sift through them all?

I remember something disturbing from my very first sociology class. Humans tend to pat themselves on their back when something good happens. Those same humans tend to blame others when something bad happens. Most of the “solutions” to shootings that are out there are externalizing the problem. Someone, some entity, some policy, some agency is supposed to fix this.

The truth of the matter is, I think we would make a much bigger impact on the world if we thought of ways to internalize the problem. What can I do? Me! After all, I am the only one I truly have power over anyway.

One of the best suggestions I’ve read out there is to try to befriend the lonely people we encounter. If we all stopped taking the easier path of ignoring people who are easy to ignore and instead reach out, that could be a profound example to our children.

My son is 15 now and in my recent parent-teacher conference, I came away a very proud mama. I heard at least twice that he is able to work with anyone he is put in contact with, even those kids that are on the fringe. While I do try to live my life in a way that reaches out to everyone, I don’t think I can take the lion’s share of the credit on this one. From birth to age 13, one of his best friends was the neighbor down the street who was on the autism spectrum. Unfortunately, he had to move away a couple of years ago and I know he misses him. From early on, he was aware that people could be “different” but he overlooked that in a way that kids can be so good at.

I plead with all of us, let’s try really hard to stop polarizing. Stay open to information. Have your views, but speak to others with respect. Actually listen to people who think differently than you do. It is amazing that just a small change in wording can make a gigantic difference in creating a more peaceful conversation. Take personal responsibility. Live your life every day the best way you can in whatever space of the world you are in.

Seem pie in the sky to you? Maybe. But I think it is truly much more effective than any of the other endless arguing that goes on politically.

Humans love. Humans sacrifice. Humans stand in front of their students and take a fatal bullet for them.

Wake up every day and ask yourself what kind of human you want to be. You probably will never have to find out if you would take a bullet for someone. But I bet you might have the chance often to reach out to someone who is less than lovely in your eyes. Do it, and help change the world.

My sister Janet is eight years older than me. I have some memories of her as a kid, but mostly there was a big enough age difference that we didn’t steal each other’s clothes or boyfriends so there wasn’t a lot of conflict.

She is the middle child, but for years we also called her the Perfect Child. As adults, I found out that she always hated that so I stopped saying it. I also call her Dad’s favorite daughter and I haven’t stopped saying that. I joke around about it, but it doesn’t seriously bother me because she is truly one of the kindest women I’ve ever known in my life.

I was just talking with a client yesterday who has a family member with cancer news. I remembered when we starting testing Tim and suspected it might be cancer. Janet lived near Rochester so she was an hour-and-twenty-minute drive away. I was on the phone with her when she said, “No matter what happens Darcy, you won’t be alone. We will be there every step of the way.” And she was.

Twice during Tim’s five months of illness, she took an unpaid leave of absence to come and help. I never forgot that because there were other relatives/friends that lived closer and were more close to Tim than she was, but she was the one that didn’t bat an eye. She just took the financial hit and came.

One memory that particularly stands out was when the decision was made for Tim to go to Hospice to try to get his sleep regulated. I called her to tell her and she made all that distance and got here before the transport car came. She and I took Tim around the property in a wheelchair to give him a chance to look at everything, reminisce, and ultimately say goodbye.

She has been here again, this time for Dad. She arrived the day before New Year’s Eve from Tennessee. And she is still here. She leaves Saturday which means she was here a full three weeks. Dad required 24 hour supervision until this week so she literally spent the whole time with him in his assisted living apartment.  I can’t even begin to express what a massive relief that was to me.  I know Dad is going to miss her terribly, as will I.

I enjoy her company immensely, but I was in a catch-22. She was here to take care of Dad, which was my chance to get a break. I wanted to visit with her, but I needed some distance from the situation at the same time. Thank goodness she completely understood that.

Even though she lives in Tennessee now, she still had a job where she had to take an unpaid leave of absence to be here. To take a three-week cut in pay when you live paycheck to paycheck is an incredible sacrifice. She makes it without blinking an eye, without a question. If I asked her to stay even longer she would.

And how do I thank Janet? I couldn’t possibly. But deep down, I know she knows. She loves me too, and came to support to me. Mostly though, she did it for the deep love she has for our dad. He’s not an expressive man, but I know he appreciates her as much as I do. 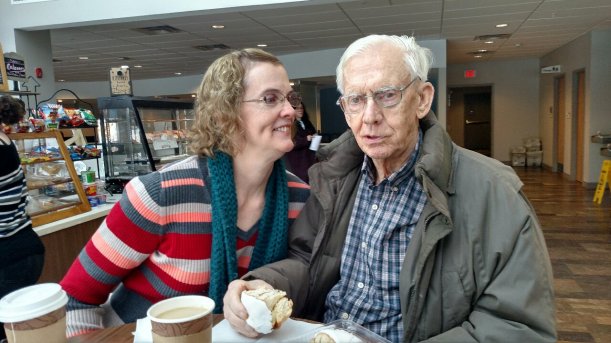 Thank you dear Janet. You truly are perfect!

After a very emotional and exhausting week, Dad is coming home tomorrow! I know it could have been a much longer time, but it felt like it was a really long road. It was weird leaving rehab today, knowing that on a Saturday morning none of them would be there when he is discharged. After a while, it feels like they are family. The physical and occupational therapy department were really great with him. They liked working with him too because he is just a nice guy and they appreciate him. It sort of reminded me of when I left Hospice after Tim died. These are people you start to see every single day, and suddenly you know you will probably never see them again.

Plus, there is the connection of feeling grateful to someone who has helped the person you love. When someone takes good care of your family, your child, whoever, there is a warmth toward them that doesn’t go away. There were obvious problems that I’ve blogged about previously, but there were many who did their jobs extremely well.

Dad is counting down the hours. They are letting him out at 9 am to accommodate my schedule because I have a hellish day tomorrow. I need to get him all packed up, transported home, unpacked, and have his meds ready for the week, all before 11 am. I appreciate them getting him out earlier for me.

My sister from Tennessee and I talked about the need for someone to keep an eye on things for the next week. The assisted living home where he resides think it’s a great idea as well. Truth be told, I think Dad does too. No more falls. He needs to be careful. Sometimes he still struggles with buttons or shoes. Someone should be nearby when he showers, just in case he loses his balance. We can hire staff to handle those things, but it’s frankly a ridiculous amount of additional money. I’m hoping we can handle it ourselves.

Monday he meets the doctor at his living complex. I’m hoping we like her. After that, I will have to buckle down and help him with all his Christmas preparations. We’ve done what we can already, but there will be plenty of last minute things. Too bad hardship doesn’t check in with your schedule. It always seem to happen at the most difficult time. But there is no one that can control that. And in a self-centered society that promotes individual happiness, the art of sacrifice is sometimes a lost virtue. I’ve been studying a psychologist who bucks that bologny and pushes for putting others ahead of yourself. It’s refreshing to read him.

Thanks to all of you for your prayers and support and visits and love and the countless hours listening to me vent. And yay to dad, who does his best to push on, even though he has been ready for a long time to be done with this side of heaven. Love you, Dad!