I haven’t been blogging on a schedule lately, so if you haven’t “followed” me, you might want to. That way you will receive an email when I blog. It’s easy-peasie.

Friday was Frankie’s Bald for Bucks event. Grandpa made the trek to attend because Frankie said Grandpa hated his long hair more than anyone else so he should be there. Here is what he looked like before the shavers got a hold of him: 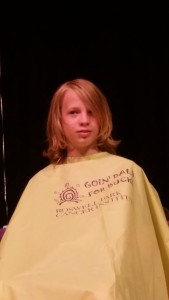 The energy level was great. The kids filled the auditorium and there was a young band there playing all the pop radio songs. The kids sang at the top of their lungs. It wasn’t that obnoxious kind of singing, just a bunch of pre-teens loving their music. There was a professional DJ there as well.

Frankie was in the first group to go for sixth grade. I was very surprised at how emotional I felt. I had to choke back tears several times. Was Frankie thinking about his dad? Were his friends thinking about the fact that Frankie’s participation carried so much significance? Were his teachers? Does it matter? 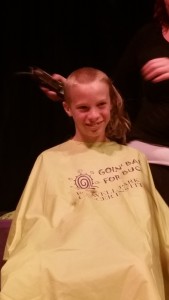 What surprised me even more was that Frankie couldn’t keep the smile off his face the whole time they were shaving his head. I love that picture because it shows him half shaved and half long hair. I took video but I don’t know how to post video on here so sorry about that.

And then the finished product. My guy with his grandpa. Again, I choked back tears. He raised $500 for Roswell. Maybe someday they really will find a cure for cancer! 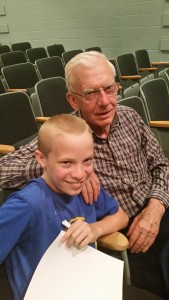